OUR GALLERY OF BOYKIN SPANIELS

THE BOYKIN SPANIEL carries a unique set of credentials that no other breed of canine can honestly claim. Originally bred by South Carolina hunters, they were developed initially as the ideal 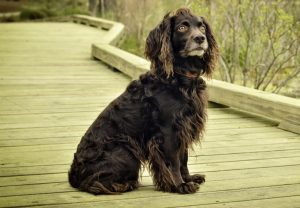 dog for hunting wild turkeys in the Wateree River Swamp during the early 1900’s. They now beautifully adapt to the dove fields, duck marshes and home fires of their modern-day masters. Most individual Boykin Spaniels have a special personality and enthusiastic field ability that no other dog can match.

The Boykin Spaniel came to be known simply and without frills. Sometime shortly after the turn of the century, a small dog was found wandering near a Methodist church in Spartanburg, South Carolina. One of the people attending services there was a banker who gave the dog to his hunting friend, Mr. Alexander L. White.

The dog displayed some aptitude that might be useful in hunting, so Mr. White sent the dog, by train, to his hunting partner, Mr. L. Whitaker Boykin of the Boykin community just outside Camden, South Carolina. With the training knowledge of Mr. Boykin, this little stray soon developed into a superb turkey hunting dog and waterfowl retriever.

According to best accounts, the dog was a male and the forerunner of all Boykin Spaniels in existence today. Other early ancestors of the Boykin are reported to be the Chesapeake Bay Retriever, Springer Spaniel, Cocker Spaniel, and the American Water Spaniel.

The fertile crescent of Boykin Spaniel breeding must be recorded as the rural communities near Camden, Sumter and of course, Boykin, South Carolina. These spaniels can be found today throughout the United States, with a higher concentration on the Atlantic Seaboard.

For many years, the city of Camden was a winter escape for wealthy northerners, who recognized the unique characteristics of the Boykin breed. The spread of this special dog to other states can be attributed to Camden’s winter visitors, who appreciated this breed’s attributes as a hunter and a special friend of man.

GENERAL APPEARANCE
The Boykin Spaniel was developed as an all-around hunting dog with a neat, medium-size compact body. Emphasis is placed on their extreme hunting abilities, characterized by flushing and retrieving, with moderate speed and agility. With pendulous ears, an intelligent expression, sturdy build and friendly wagging tail, they are proclaimed as part of the spaniel family.

SIZE, PROPORTION, SUBSTANCE
The Boykin Spaniel is built to cover all types of ground conditions with nimbleness and reasonable speed. They should appear as a dog with endurance for a full day hunt with good, but not too heavy bones. They should be well-balanced and sound, showing the ability to the breed’s intended function. They are solidly built, with moderate bone, and smooth firm muscles. A well-balanced dog, they are somewhat longer than tall and should be kept at a medium size. When measured from the point of shoulder to the buttocks, it is slightly longer than from the withers to the ground. The ideal height for these dogs is 15½ – 18 inches at the withers; bitches 14 – 16½ inches at the withers. Faults: A dog that is either too long in body or too long in the leg is not in keeping with the standard. Dogs that are large or heavy, as well as those that are slight, shall be equally penalized.

HEAD
The head must be in proportion to the size of the dog. The Boykin’s expression is alert, self-confident, trusting and intelligent. His eyes are varying shades of brown, set well apart, medium-sized and oval shaped, and should not be protruding or bulge. The Boykin Spaniel’s ears are set slightly above or even with the line of the eyes. The leather of the ear is thin and when pulled forward should almost reach the tip of the nose. The ears hang close to sides of the head and are flat. The skull is medium length, broad, flat on top, and slightly rounded at the sides and back. The occiput bone is inconspicuous. The stop is moderate. When viewed from the side, the nasal bone and the top of the skull form two parallel lines. The muzzle is approximately the same length as the skull, and when viewed from above, the width of the muzzle is approximately 1/2 the width of the skull. The distance from the tip of the nose to the occiput is about the same length as occiput to the base of the neck. The jaws are of sufficient length to allow the dog to carry game easily with no inclination of snippiness. His nose is to be fully pigmented, dark liver in color with well-opened nostrils. The lips are close fitting and clean without excess skin or flews. The bite should be scissors or level, but scissors is preferred. Overshot or undershot bites are serious faults and should be penalized.

NECK, TOPLINE, BODY
The neck is moderately long, muscular, slightly arched at the crest and gradually blends into sloping shoulders. The back is straight, strong and essentially level. Loins are short and strong, with a slight tuck up. The Boykin Spaniel body is sturdy, but not too compact. The brisket is well developed but not barreled, extending to the elbow, yet not too broad or narrow as to interfere with movement. The croup slopes gently to the set of the tail, and the tail-set follows the natural line of the croup. The tail is docked to a length of 3 to 5 inches when fully mature. The tail’s carriage should be carried horizontally or slightly elevated and displays a characteristic lively, merry action, particularly when the dog is on game. A clamped tail, indicating timidity or undependable temperament, is to be faulted, as is a tail carried at a right angle to the backline.

FOREQUARTERS
The Boykin Spaniel’s shoulders are sloping, clean and muscular. Their legs are medium in length, straight and well-boned, but not too short as to handicap for field work or so heavy as to appear clumsy. The pasterns are strong, with no suggestions of weakness. The toes are closely grouped, webbed and well-padded. The feet are round, compact, well-arched, of medium size with thick pads. Dewclaws should be removed.

HINDQUARTERS
The Boykin Spaniel has well-developed hips and thighs, with the whole rear assembly showing strength and drive. The hock joint is slightly rounded, should not be small or sharp in contour and moderately angulated. Legs from the hock joint to the foot pad are moderate in length, strong and straight with good bone structure. Hocks are parallel.

COAT
The Boykin Spaniel has both an undercoat and an outer coat. The coat can range from flat to slightly wavy, with medium length on the outer coat. The undercoat is short and dense. The ears, chest, legs, and belly are equipped with a light fringe of feathering. The coat may be trimmed to have a well-groomed appearance and to enhance the dog’s natural lines. It is legitimate to trim about the head, throat, ears, and feet to give a smart, functional appearance. A rough, curly or harsh coat or no undercoat is to be penalized.

COLOR
The Boykin Spaniel has a solid and rich liver, brown or dark chocolate color. A small amount of white on the chest or toes is permitted, but no other white markings are allowed.

GAIT
The Boykin Spaniel moves effortlessly, with good reach from well laid-back shoulders, at an angle that permits a long stride, in balance with the rear quarters for strong driving power. When viewed from the rear, the hocks should drive well under the body following on a line with the forelegs, neither too wide or too closely spaced. As speed increases, it is natural for the legs to fall to a center line of travel. Seen from the side should exhibit a good, long forward stride.

TEMPERAMENT
The typical Boykin Spaniel is friendly, a willing worker, intelligent and easy to train. They thrive on human companionship and get along well with other dogs and children. They show great eagerness and energy for the hunt, yet are controllable in the field. Any signs of excessive aggression towards other dogs are not acceptable and should be penalized. Excessive shyness is to be equally penalized.

NEEDS
The Boykin Spaniel is a working dog and needs a lot of daily exercises. Long, brisk daily walks are important, where the dog is heeling beside or behind you; never in front, as in a dog’s mind, pack leader goes first. This is an intensely energetic dog that needs adequate exercise and a “job” to do daily to burn off energy and work its very nimble mind. They will find ways to entertain themselves if not provided by their owner and can be very destructive when bored or when their primal instinct to walk has not been fulfilled.

GROOMING
Moderate Maintenance: The Boykin’s medium length double coat can be flat to slightly wavy, with a light fringe of hair called feathering on the ears, chest, legs, and belly. Weekly brushing and the occasional bath will keep your Boykin’s coat in good shape. You can have a professional groomer clip the coat as needed for neatness.

HEALTH ISSUES
The most common health issues are hip dysplasia, eye problems such as cataracts, and a few localized lines have heart and skin problems. They are prone to ear infections and are not hypoallergenic.

Our Gallery of Boykin Spaniels